Most Expensive/Inexpensive Towns and Cities in Metrowest Housing

I've been collected this data on the blog, and, as is my way, I like to summarize it up and publish it for my growing following (thank you readers!).  Now, don't just look at the graph and run away, I have some information you need to know!  First off, this graph is based on the data of the AVERAGE of all sales in the last six months from the MLS listings.  So unlike most real estate price statistics, I'm using an Average, and not a Median.  The differences between averages and medians aren't huge, but I will tell you something you can't see from the graph.

Now, it's NOT TOTALLY wrong.  It's not useless.  But I will tell you that Medfield and Sudbury are far more expensive than Southborough.  But my definition of expensive is what you're paying a square foot to own a home, and Sudbury and Medfield are much more expensive by that definition.  So what's up with the graph?  Well, Southborough sold a slew of very expensive houses last year.  And since there were only 86 sales, these sales pushed the average price metric through the roof.  It also dragged the median way up, which lead to a mention in the Boston Globe that Southborough had seen some of the greatest price appreciation in Massachusetts.  The Moral of the Story:  Medians and Averages are dangerous to look at and draw firm conclusions from over small data sets.

Now having said that, overall the graph is fairly accurate, and as long as you don't take it too literally, useful for understanding where you can get the largest, newest home for the same dollars. 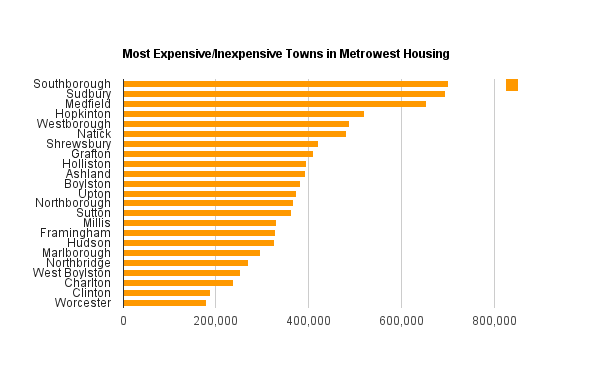 I'm sure you're wondering, if you've read this far, why didn't I just published the square foot metrics?  Well, I'm not tracking those numbers just yet, they are much more difficult to get, and have their own issues.  But perhaps with a little encouragement in the comment section, I could be persuaded.