How the Prices Moved in 2016 across Metrowest

Those who follow the blog know I update a periodic segment of how prices have changed across the area.   (Want to see the history?  Here's where I keep them: ) 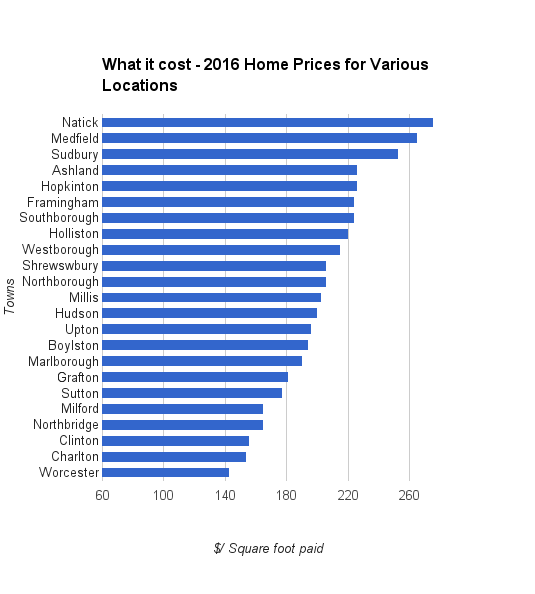 Housing in Natick costs a little more than twice what it costs in Charlton and Worcester.    That's a lot, but the ratio has stayed about the same since we started tracking. You would think, however, that the ratio wouldn't be what stays the same, but the differential in raw dollars would be the same.  In 2012, for example, Natick was $115 dollars per square foot more expensive.  But now it's $150!  That' doesn't seem rational to me, and I wonder if that means Natick will slow down, and Worcester will catch up.  If that's what happens, there's going to be a whole new element to my data efforts, one that have big impacts for market predictions.

I think it's interesting the Shrewsbury is so close to Westborough, Southborough and Hopkinton - since it's considerably further west - and I wonder if that will continue.  Shrewsbury had a great run this year.  Southborough seems low - and due for run.  In the original graphs it was comfortably top 4, but is now in the mix between 4-9.  The gap between Natick and Sudbury seems awfully big - hard to think it will stay that way indefinitely, but we will see.