Board and Batten DIY Project

There are lots of ways to do board and batten.  Board and Batten is a type of trim that is often found in dining rooms, on stairways, and in mudrooms.  It's not nearly as common as standard wainscoting, and bead board is easier to do, but if you're looking to add punch, board and batten is a great way to go.  So!  If you new to the trim style vocabulary, here are some quick examples for you.

Here is a link to some standard wainscoting.  Chair rail at the top, and small pieces of trim, typically in a rectangle.

Here is bead board (which i really like, but just didn't do here)

and here is board and batten (a high version):

My house has a fairly "blah" trim level, and as I update it I'm looking to add more punch.  Typically, dining and living rooms are where there is the most punch, so I started in the dining room.  I wanted to do something that wasn't too over the top, but would really add depth and character to the room.  I guess this is where we show the "before" picture.

My home largely has 2.5 inch colonial trim.  Blah.  Here's what it looked like. 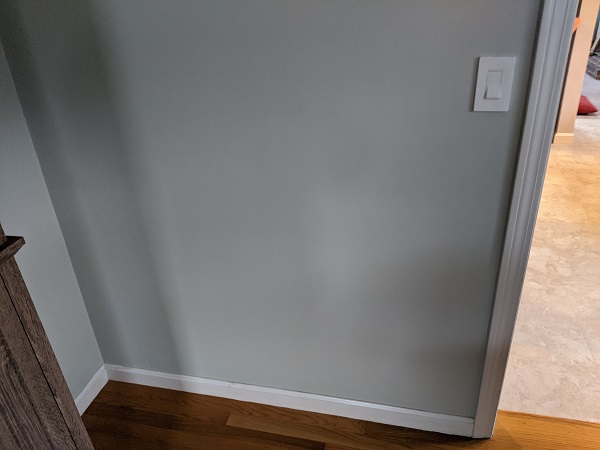 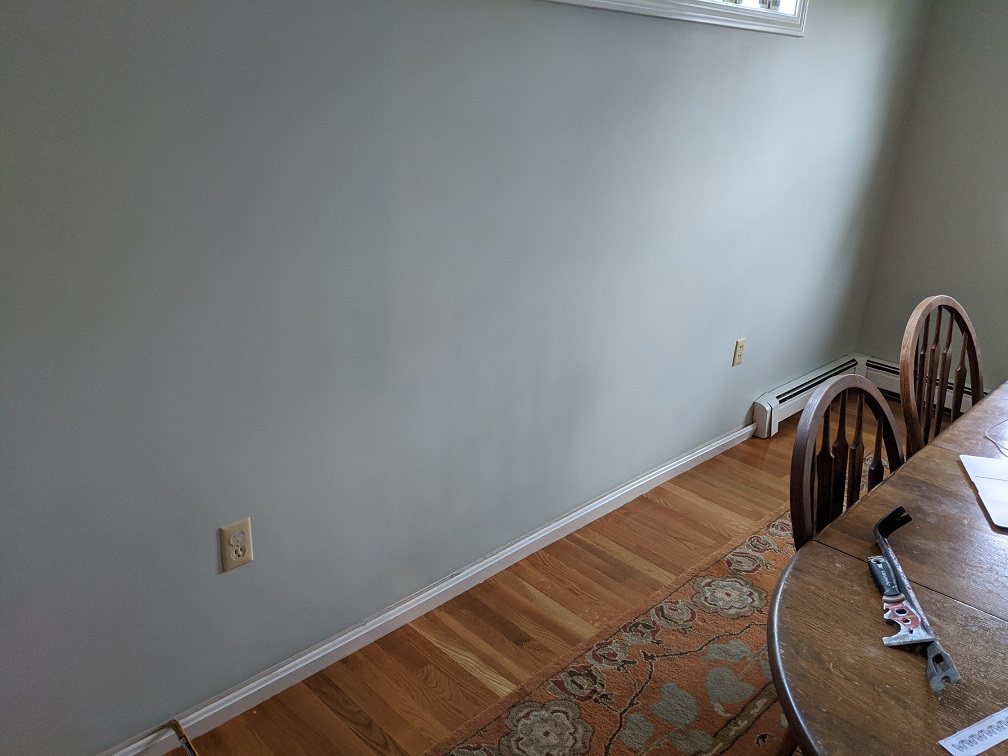 Yep!  That's it.  2.5 in baseboard mostly buried by the hard wood floors.  Plain.  We can do better!

I have a day job, I just do this stuff for fun (really), but I am pretty tool light.  This whole project was done without a miter saw (which would have made it easier), but you can really do a lot with a very simple tool set.  Hammer, finish nails, MDF boards for the baseboard and stiles, pine boards for the chair rail cap, liquid nails adhesive, caulk, a circular saw, a carpenters nail (for sinking the nail heads), and general paint tools.  I actually needed more tools just to get the baseboard out, but we'll get to that next.

I noted a number of DIY videos where they do board and batten on top of the existing baseboard.  I'm going to tell you now, if that baseboard isn't at least 4 inches you'll never forgive yourself for not pulling the old stuff out.  For me, it wasn't an option.  I like demo anyway.  There was no saving this baseboard  - and you shouldn't expect to save yours - unless you can find all the nails and pull them out.  About 1/3 of the nails were below or at the hardwood floor level (the baseboard went in first and the hardwood floors second, but I prefer the other way!).  Anyway, there were a lot of nails, and they did a good job finding studs.  I found good success with a couple of crowbars, a stiff painters tool, visegrips and a hammer.  Basically, you want to use the painters tool to open a gap, and then work the crowbar in and just go up and down until it is loose.  Use the visegrips to pull out as many nails as you can before really trying to pull the baseboard out.  And be CAREFUL.  Don't screw up your floors.  Use a small block of wood under the crowbars when trying to lift the baseboard out, and don't pull on the baseboard so hard you hurt the floor (but in practice, the oak flooring is way stronger than pine baseboard!  My baseboard cracked and shuddered and then split, but it did come out. 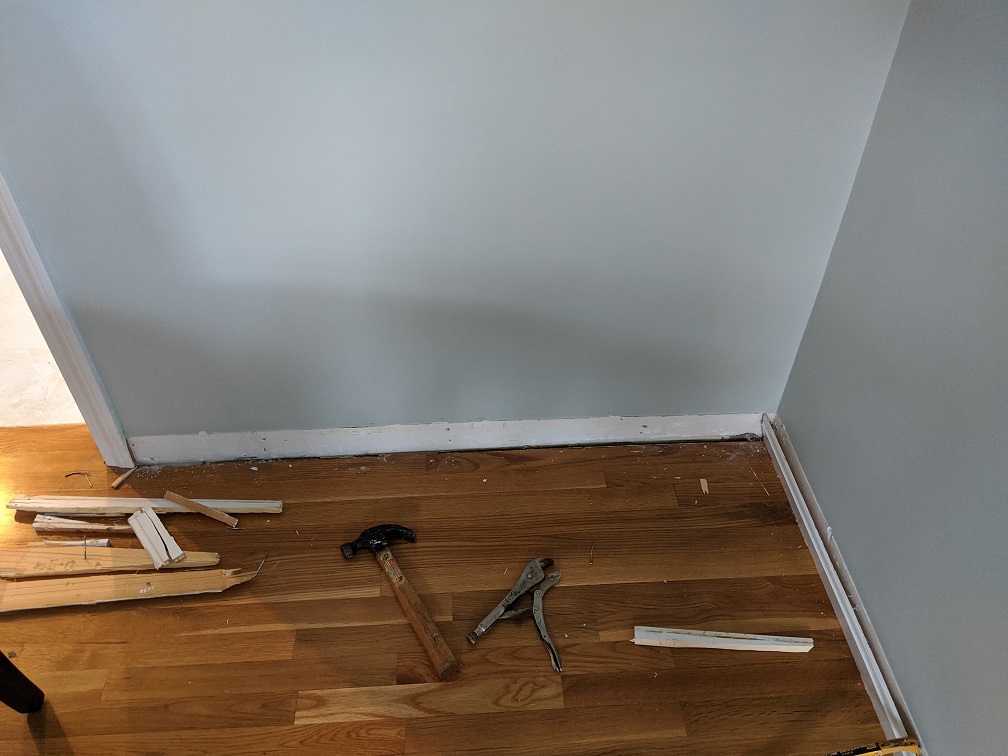 I will share that this really was the worst part of the project.  Should be easy, but it's not.

We can Rebuild It

Once the old baseboard is out, you've got a nice gap.  I know just what to put there.

I used 5" MDF boards and they slid right in.  They were a shade thinner than the baseboard, but it was winter, and that is when the gap is at its biggest.  No need to angle cut the inside corners, just meet them up square, and we'll caulk 'em later. Then, using a level (not a tape measure!!), draw lines for your chair rail foundation.  This was 3.5" mdf board.  It's super important to make sure your baseboard and chair rail are level to the eye (NOT THE FLOOR), before nailing them off.  I did use a little construction adhesive for the chair rail, but not much - mostly nails in studs. (I used 2 inch finish nails, which is on the long side, but really helps in the corners to reach the studs).  Lastly, before picking a height for your top rail, do yourself a favor and make sure it's not at light switch height. 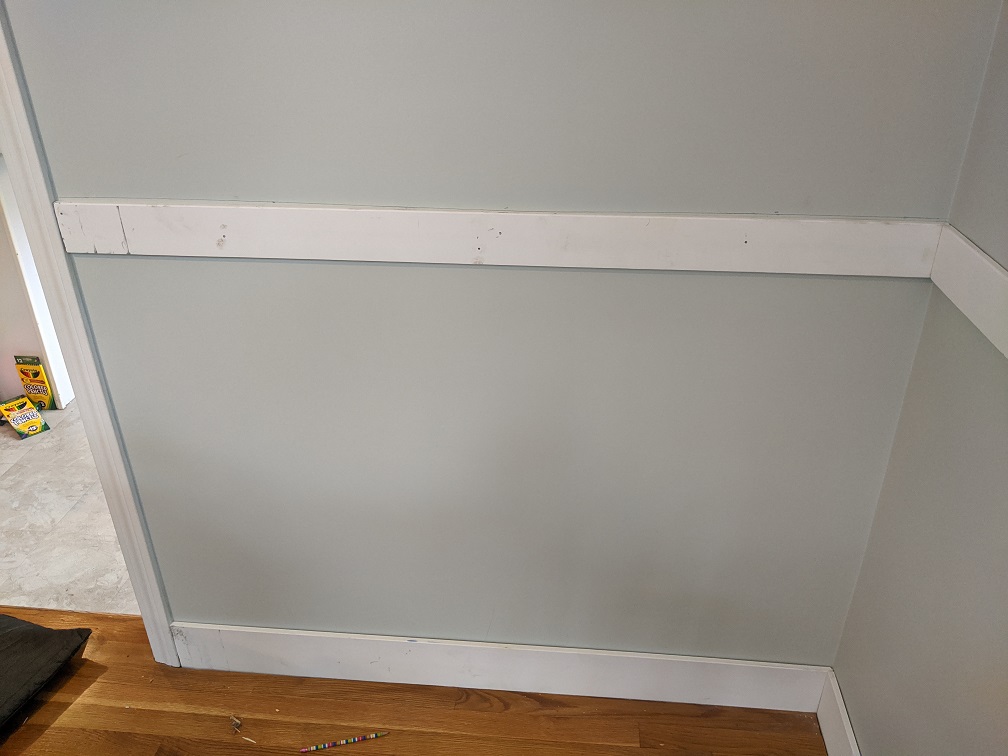 So we are already looking better.

Now the next part - if you're going to get it right - requires math.  I built a spreadsheet (thank you, day job) and measured everything carefully.  Note, I measured all the walls, and then adjusted the number of stiles (the vertical boards of board and batten) until most of the walls had similar sized gaps.  That's right, they aren't identical.  You're going to find that identical isn't possible, but if they are close, you'll never see that they aren't.   The other thing to keep in mind is that not all of the stiles are going to be over studs  - so you'll need to use real construction adhesive (like liquid nails) and not caulk.  Caulk won't hold long term, use the right stuff.  I used adhesive on all the boards, but I used more on the ones that weren't over studs, and less if I could use the stud instead.

Yeah, I know.  But without this spreadsheet you are really guessing, and I have to tell you, that is a bad idea.  You can see all but one wall ended up with gaps that were within an inch of each other, which I was pretty happy with.  There's no right or wrong here, but you'll want your gaps around 15-25 inches apart.

OK, all measured?  OK, wait.  It's a good idea to paint the wall between your chair rail and the baseboard now.  It'll save time later.  Not a lot of time, but some, and some is good.  I did it both ways, and it was definitely a little easier painting first. 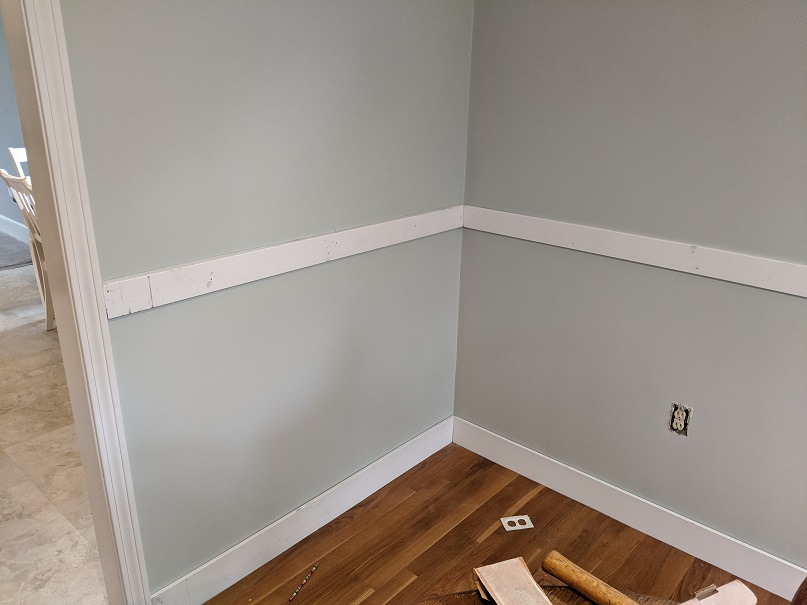 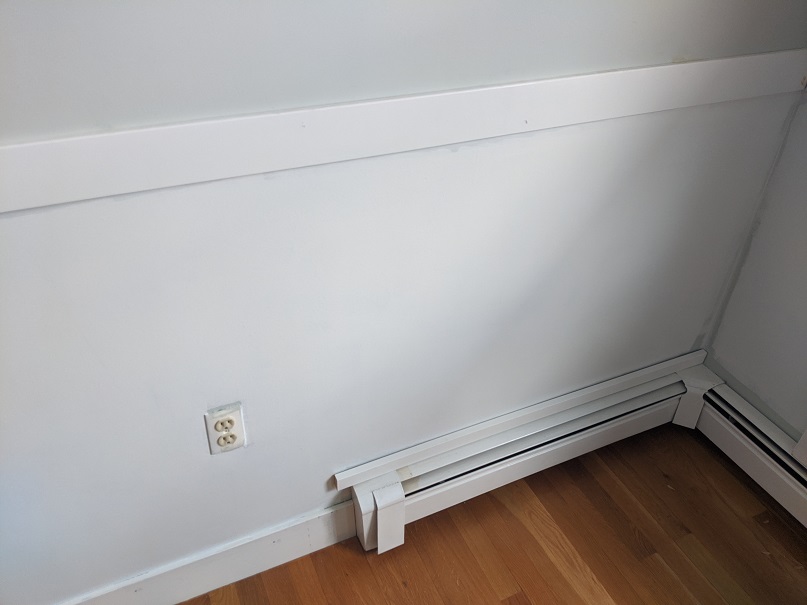 and with battens but no paint: 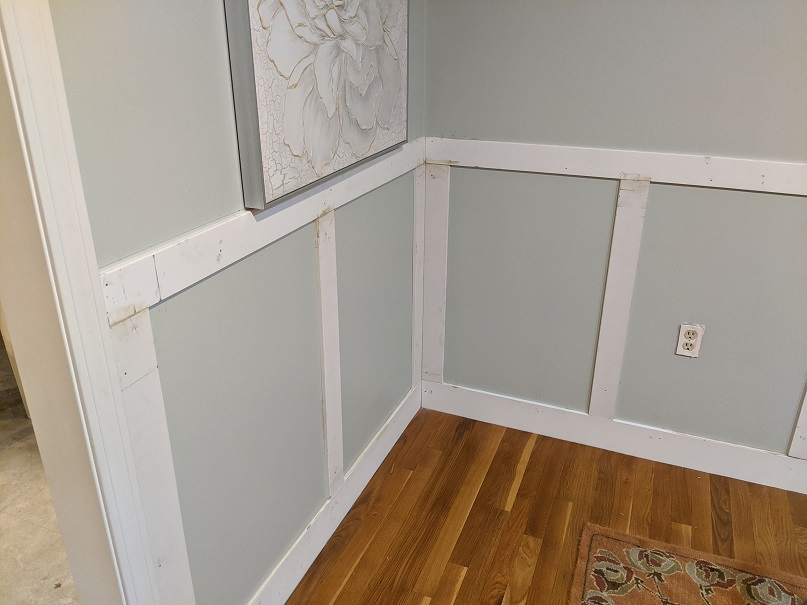 OK!  Believe it or not, we are almost there.  I used the same 3.5" mdf for the stiles, and you can see I always double them up in the corners, and made sure each wall abutted the trim with a stile.

The actual chair rail - which will sit on top of the top board- you can do all sorts of things.  I went simple, and just did a pine wood cap (MDF isn't really strong enough for the abuse a chair rail takes). 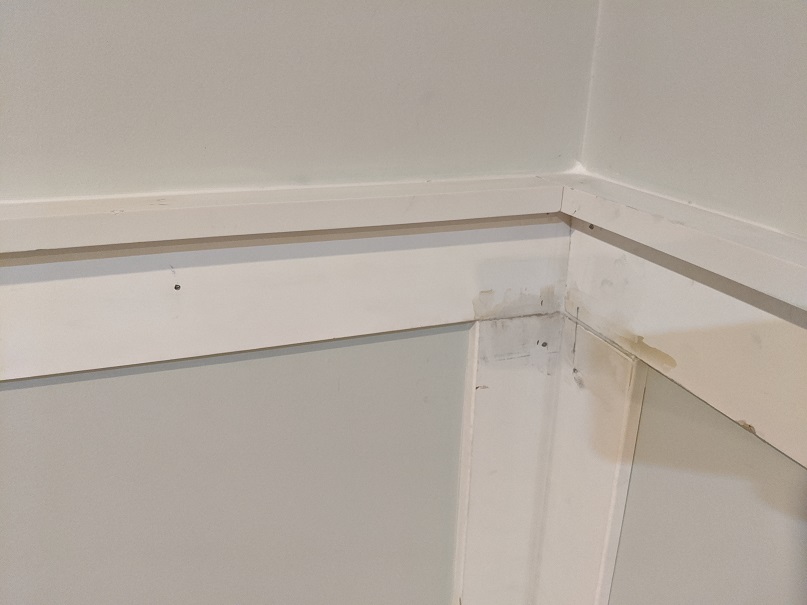 I'm sure, at this point, you are unimpressed.  Well my wife sure was!  But that is what paint is for. 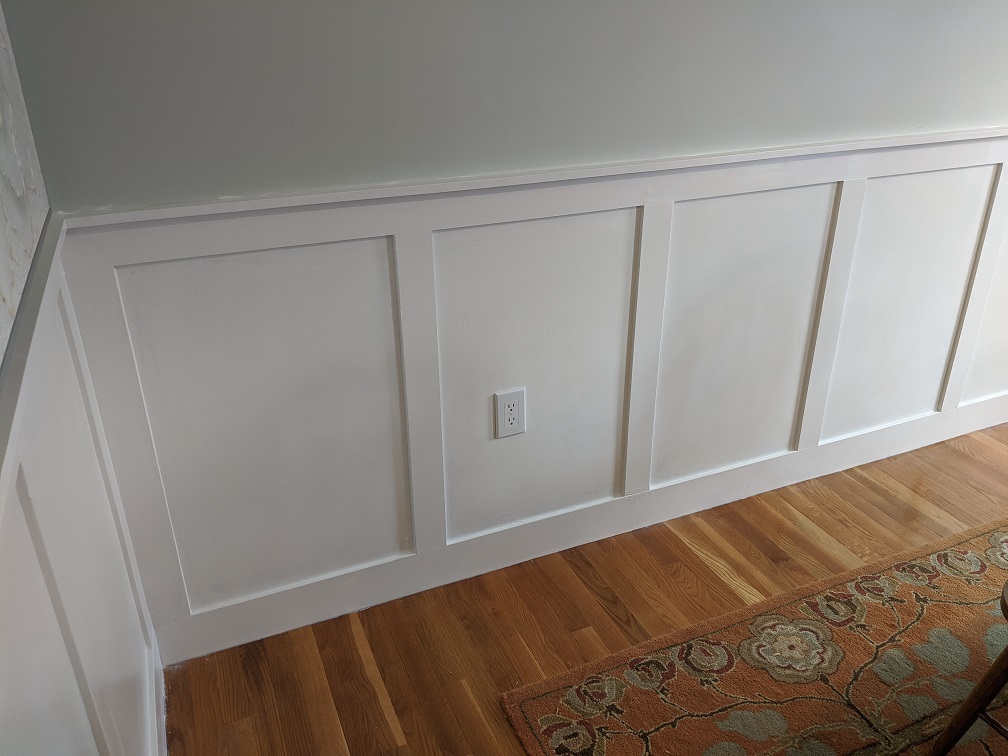 Yep, a little paint will go a long way.  Oh, and for those that noticed, the plugs were updated also.  Now you can hire an electrician for that, OR, you can just do fancy covers, which I did for under $3.  Here's the cover: 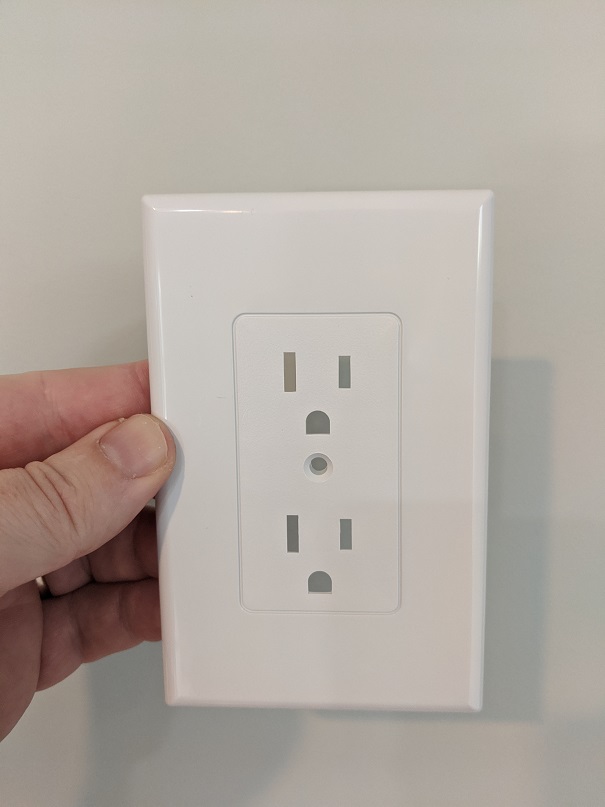 Yeah, that takes 10 seconds, and makes  a huge difference.

OK, so BEFORE and AFTER (pictures of the same corner, but from different angles). 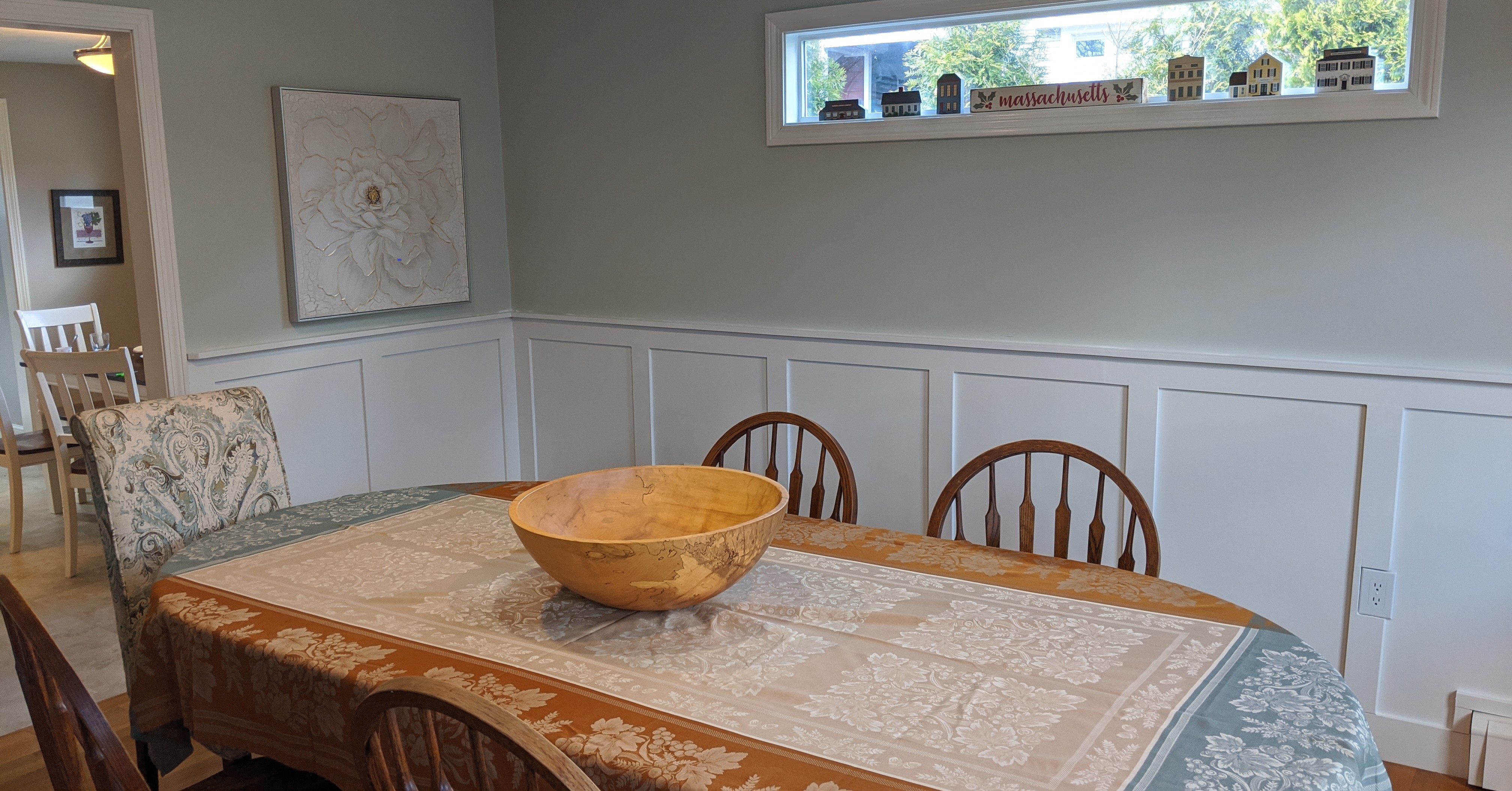 So you might be thinking that this is an expensive undertaking.  Well, it's not.  True, if you get a carpenter and a painter you are probably looking at a couple of grand at least.  As a DIY, however, it's a no-brainer cost wise.  It was less than $200 in mdf/wood, a gallon of paint, $15 for nails, caulk, and glue. An amazing improvement for less than $300.

If you have board and batten questions, please send them my way on the blog!