See All the Rankings!

OK.  Been wanting to do this for a while, but hadn't worked out the Methodology and data sets yet.  But, I'm close enough*, so wanted to get it out to my growing readership.  People love charts, so here's one for ya. 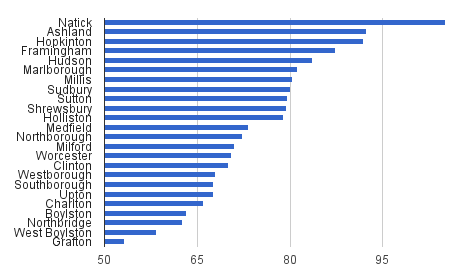 OK, so how is this chart read?  Well, it's pretty simple. First of all, it's not a ranking of where you should live.  By and large, the best town for you depends on, well, YOU!  If I ever figure out how to put that in a formula I will, but don't hold your breath :-). OK:  If you're selling, or want to sell, it's better to be at the top.  If you're buying, you may want to think about some of the towns near the bottom.  All the towns that I cover have been compiled based on the statistics that I track here on the blog, and then I use a weighted average to come up with the final scores.  (Details available upon request - just e-mail me).

It should be no surprise to regular readers that Natick finished in the top spot - it was simply En Fuego this year.  All the towns with a score above 90 (Framingham and above) currently have very strong demand.  If you've been selling in the hot towns and you're not seeing demand, well 'Lucy, you have some 'splaining to do!', which means you should look in to that and start asking questions!  Buyers will have more choices - and more leverage - in the towns near the bottom (Worcester and below).  Sellers in those markets are likely very anxious for solid offers, and they have been waiting around for them.  Sellers in those markets should be thinking about their pricing or improving their property, or waiting for a better time to list.  They are not real estate markets, IMHO, where you should be 'reaching' for a price, or 'testing' a price.  There's not enough demand to play around with your most important asset, so get serious about selling from the get go.  A final note, prices and valuation do not play any role in this data, so just because Sudbury is more expensive then Worcester it doesn't get a higher score.  That's really a separate issue, and we might see that chart later.

Real Estate Trends From the Chart

If you look at the towns near the top, they are, by and large, towns on the eastern edge of the towns covered.  This tells me that demand last year was so strong east of those towns, that the buyers got tired of waiting and  "spilled over" and started grabbing property in the next towns over.  I didn't see a ton of price appreciation in these towns, but if they heat up again this spring we will see it - sales can't keep out selling the inventory and not have an effect on prices.  Frustrated buyers in those towns will continue moving West, as is typical in Massachusetts, and we might see tighter markets in the middle group, where markets are balanced, in the late spring.  A couple of individual towns also stand out.  Southborough was much higher until the last report, as it really stalled in the last few months (it's a small town, data can change very quickly).  The spring in Southborough was really strong last year, a trend we might see again since I don't see any softening to the east.  Holliston is also pretty strong, but it's numbers are hurt a bit by some large, expensive, new construction projects that are distorting the numbers more than is some of the other towns.

Don't like your rank?  Ask me why it is where it is. Feel free to comment if you think this is nonsense or not.  And again, if you'd like to see the full data sets, you can ask for it.  You can also ask for how the scores are calculated based on the data, but don't expect an exact answer - that's my little secret.

*Not all of data is collected at the same time, some smaller towns may not have accurate results do to limited data sets. Also, much of this data is based on December statistics, which have seasonal variations. Lastly, I tweaked the rankings a bit I did after the post to better represent market time for solds.