The HSI vs. my Home Price Change Graph

Any reader on this blog has probably become familiar with my HSI metric. My Home Selling Index is designed to give you an update window on what buyers and sellers are doing in that market as close to real time as I can get it. But there are other ways to measure demand swings, and one of those is prices. I collect $/sq foot numbers on all the towns, and decided to use a "baseline number" collected in the last part of 2011 and January 2012. Some markets had already seen price increases, and some hadn't but we'll get to that in a minute. Let's look at who has come up the most since that time frame. 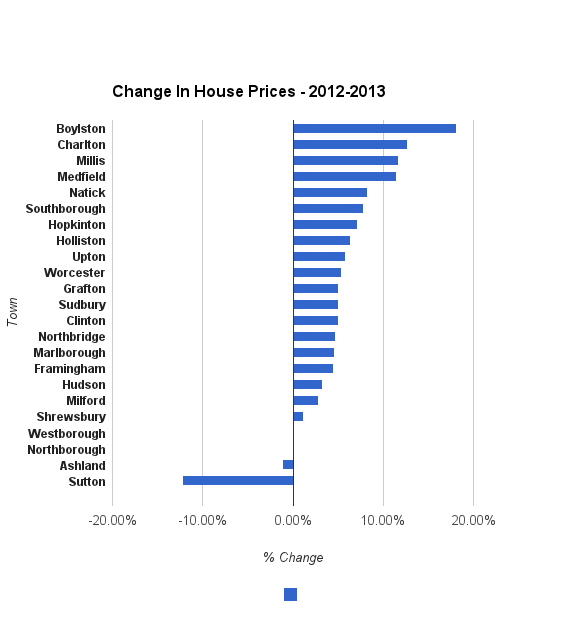 Surprised at the Towns with the Largest Price Changes?

I bet you see some things you may not have expected. So Let's explain some of them.

1) First off, although 18 months seems like a long time, it's not really long enough to measure - accurately - prices change town to town. Some towns are just too small, and the data jumps too much.

2) As noted, some towns had not seen any increases at all, and when town rebound, we see sharp price increases. Other towns had already rebounded, and had less upside.

3) Over time, the sharp changes will flatten out (that's a prediction from me, folks).

So with that, we see that some "laggards" - Boylston, Mills and Charlton, sit atop the chart. That's what a rebound looks like in Real Estate.

Then come some not unexpected company - Natick, Medfield, Southborough and Hopkinton. These towns have seen strong demand for years, and their prices increases should not be a surprise.

The middle is all muddled, with most of the towns between 2-5% increases, but I did want to talk about the towns on the bottom.

Westborough, Northborough, Ashland and Shrewsbury. I should put Sutton here too, but Sutton makes no sense to me, so I can't comment on it. Not yet, anyway.

Northborough's price stall has been well-documented on this blog, and makes no sense to me. Westborough's has to do with a big run-up in 2011, a large tax rate increase, and then a flattening out. Even with all that though, I expected the numbers to be better. Shrewsbury also had an early bounce, but should be doing better, given it's favorable tax environment and younger neighborhoods. Ashland, also is a bit surprising, I think like Northborough it has more upside in front of it. Too many positives in those towns for them to remain laggards for long. We will certainly check in again at some point.