Who's Hot? The Real Estate Markets where Buyers Acted the Craziest this Spring, 2015

It's the story of real estate: Markets get hot, prices go up, and eventually - markets cool. Natick has been on a long run - and had fallen to the #2 hot market in the last report. It's now fallen to fifth, as the higher prices are pushing more people out of the market, and halting the bidding wars that have been going on for years.  This is the first time in a while we don't have a single town above 300, showing that there is much more of an equilibrium across the area for home prices.

What do I mean by equilibrium?  Since the start of the recovery, we've had a few towns where there were WAY more buyers than sellers. Those locations resulted in intense, quick rising markets.  As the prices rose, buyers moved on to towns that had better value propositions.  By equilibrium, I mean that the demand is much more evenly spread out across the whole area.  It's not even, of course, that's what the chart illustrates, but it's much MORE even.  The lowest score is about 100, and the highest is 255 or so, for a total range of 155.  In the last report, the total range was 260 - a spread almost 30% higher.

Instead, Hudson and Ashland have made big moves to jump up to the top of the rankings, and the reason is simple: VALUE.  These towns have seen prices move, but not as much as many of the towns on the list, and at this point, they are relative values.  The market rewards value by quick sales, and markets that heat up.

If you've forgotten where we've come from, you can take a look back here.  This chart from 2012 has just one town (Natick) above 100, while all the other towns are closer to 80 than 100.  It's quite the stark comparison. 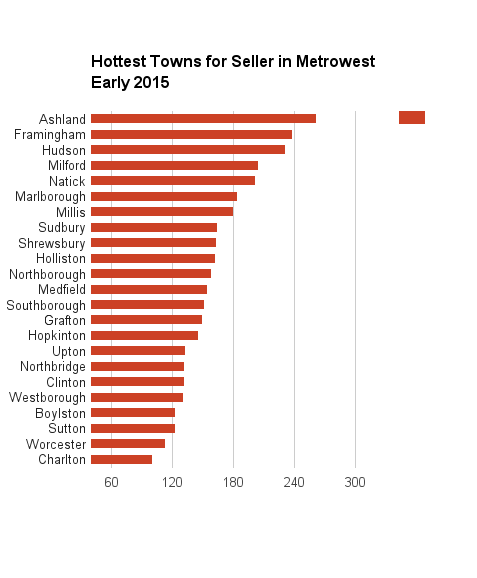 What are the home price expectations?

One place where Natick hasn't moved is prices.  It remains number 1, and has advanced well past towns like Sudbury and Medfield.  If you can't make the price jump to those three towns, the next 7 towns are all very closely related in price.  Framingham is the town that has moved the most recently, and it's market is very hot - so watch the prices there - but the other towns have mostly stabilized and are very rational.

If you still need greater value, the towns below the top 10 will provide it, and a number of them look like they are poised to see price jumps - Upton, Grafton, maybe Marlborough, Milford, all have room to run.  It should be noted, that this chart is pretty close to what the relative value of all these towns should be as a basis point.  The reason this chart is more accurate than its predecessors is because of the pretty good equilibrium noted in the chart above. 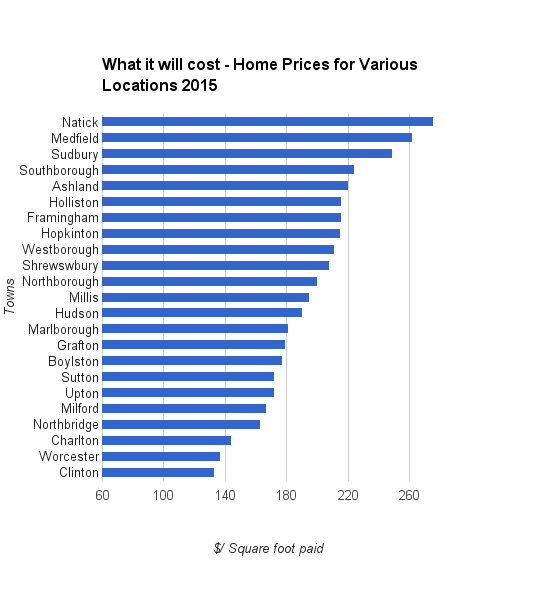 Which towns have done the best?

I wish I had started tracking this data in 2009 and 2010, but I didn't. Still, over the long-term it will provide my readers value. If you look at the last chart, Upton had only moved 3%, but has now tripled that.  Many other towns that were at the bottom are starting to move in price appreciation, and that gets us right back to value.  The towns near the top are slowing down in appreciation, while the ones near the bottom are closing the gap. With virtually every town up 10% or more, you can see the entire area I cover is now in full swing recovery.  Several towns have rebounded from all their losses, and are charting all time highs. A bunch of towns are close, and about a third still have a ways to go - but the process is on the way.

Next year the I'll have four years of data, and it should really start to show how the market recovers. 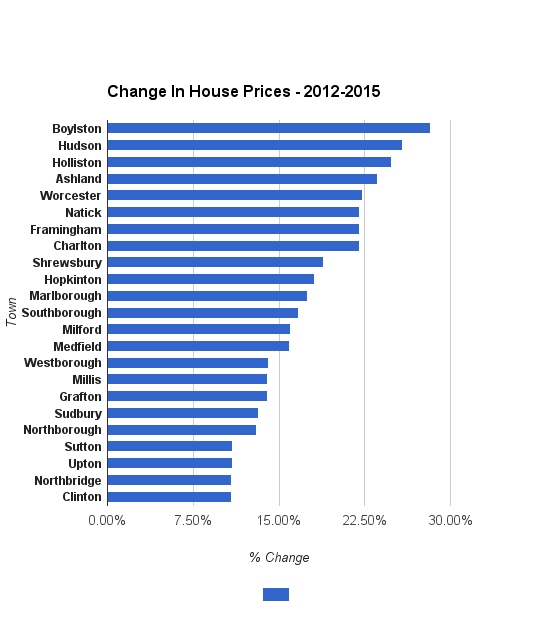