Things everyone should know about their driveway and walkways

With all the wonderful weather, I've noticed that a lot of folks are behind on their driveway clearing.  Here's some driveway and walkway tips.  I don't know if I'll get to 10, but there's some good nuggets here!

OK, so you go to the hardware store, and there are a bevy of products.  Some are 'safe', some are 'super-heat', but what does all that mean?  It comes down to some basic elements. Well, ok, compounds, but basic stuff.  There's two types of Salt that are used in typical applications for driveways and walkways.  Regular "rock salt" which is essentially the bigger brother of the salt on your table - Sodium Chloride.  Then there's the "safe" stuff, which has Magnesium Chloride.  So what are the differences?  Well, here's a few. 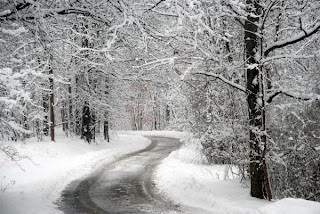 There are also other, less common types. I've also noticed that some stores sell "mixes" of magnesium chloride and rock salt. Of course, a mix means you've still got the limitations of rock salt, but you're paying a higher price for it. If you're looking for safer, better stuff, stick with the pure magnesium chloride. Buy both, you can always mix them yourself, but then you'll know what's what. So, read your labels! Rock salt especially will "eat" through concrete the same way it does ice, through a chemical reaction with the concrete. This could create weak spots and eventually chips and cracks in your walkway or steps, necessitating it's replacement, and that can be a lot of dough! If your walk is already in trouble, sand is a super-safe alternative to any type of salt, and is pretty good at reducing slips and falls.

When to use asphalt sealant

Some folks are asphalt sealant junkies.  I see them out there every year sealing up their driveway.  Sealant will help you extend the life of your driveway by filling in small cracks, keeping water and ice out, and keeping those cracks from getting bigger - for a while, anyway.  It won't help fill in big cracks, at least not enough to keep mother nature from doing damage.  Also, too much sealant can be a problem, both aesthetically and interfere with your driveways functioning.  Every year is almost always too often!!

When to Patch Those Cracks in Your Driveway

Patching cracks is important.  New England winters are tough on driveways, and crack repair is an often overlooked home improvement task that can extend the life of your driveway significantly.  It's pretty simple, if you close up the cracks, you keep water out.  If the water stays out, then the ice stays out, which widens the crack when the ice expands.  If the water stays out, then it doesn't settle the sand under the driveway base, which causes the ruts and the unevenness in driveways.  Get it?  Great.